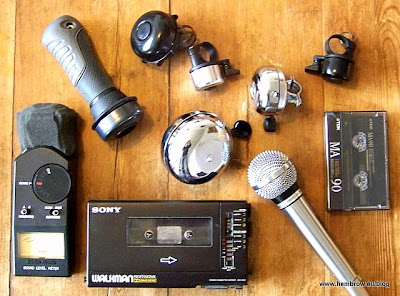 I've got a bunch of bicycle bells here at the moment as we've wanted for some time to have these available in the webshop, and as with other things in the shop, I've specifically bought in those that we like. However, rather than just listing the bells, I decided we should do this well. Let's test them to find out how loud they are, and also have sound samples so that people can hear what the bells sound like. And here are the results, ranked in order of how loud they are from one metre away, and with recordings of each bell. Click on their pictures if you'd like to buy them:

If you have space for it on your handlebars, the Widek Ding Dong bell gives the most sound. It's rather subjective, but to me it also gives by far the best sound of the bells. Just listen to that sustain. There are now cheaper copies available, many of which look very similar, but they do not have the same resonant sound. The Ping bell, which is smallest and weighs just 20 g, is best for those with limited handlebar space or who are concerned about weight. It's surprisingly loud, but note that because it has little sustain it's not really more effective than a traditional bell.

Free Bells !
We have a freely downloadable Android application which includes all these bell sounds.

How I tested and recorded the bells

For the geeks amongst us, this is how it was done.

I used my old Radioshack sound-level meter to find out how loud the bells were. Each bell was held one metre from the SPL meter. These tests were all done in the same way, so they are directly comparable with one another. However, because this was done indoors and with reflective surfaces (the wall and table) nearby, you would get different figures if you measured out in the open. Each bell was rung a few times in succession, as you might if you thought you were about to collide with someone. I think it's reasonably representative of what you might do if you were really trying to get someone's attention. With a single ring, the slow rise-time of the analogue meter missed the peaks. As a result, this helped the ping bell result more than the others. A single "ping" doesn't really sound louder than some of the quieter bells. The loudest bell subjectively with a single ring was definitely the ding dong bell.

In any case, the peaks were quite a lot louder than the figures here. By the end of the test, it was not only the bells, but also my ears that were ringing.

A Sony WMD6C "pro" walkman was used to make the recordings. I'm not a big fan of Sony, but this was always a splendid product. I found the quietest room in the house, and used a long microphone lead so that I could be at the opposite end of the room from the recorder. I did in in this way for two reasons. First because I wanted to get away from the fan noise of the computer - the walkman is much quieter and easily portable - and secondly because I liked the idea of playing with the walkman again. It's a great piece of equipment which I now rarely use. Yes, an analogue recording on a cassette, but not any old cassette deck. The recordings give a pretty good idea of the sound of each bell, though reproducing the sound at a level anything like so loud as in real life is actually quite difficult to do.

I'm not going to pretend I don't care about technical issues, around cycling or anything else. I don't think it's cool not to know stuff. I'm proud to be a geek...