Installing dynamo lights on my own touring bike

In our webshop, DutchBikeBits.com, we sell a wide range of dynamo lighting because this is the type of lighting that we like to use on our own bikes.

In this blog post I install a Nordlicht Dynamo and a 60 lux Philips headlight as well as the battery version of the excellent Philips rear light on my own touring bike.

The Philips headlight is one of the very best dynamo headlights available. It has one of the best beam shapes, wide and very bright but with a cut-off at the top to avoid dazzling oncoming cyclists.

We recommend powering the Philips headlight with a Nordlicht dynamo - the best bottle dynamo ever made - in order to create a very effective dynamo lighting system which is easy to fit to an existing bicycle.

At the time of writing, Philips were supplying free spoke reflectors with the headlight and rear light combination. Unfortunately those are no longer available. This offer was available only if you chose the battery powered version of the rear light. I now recommend the dynamo version of the light instead.

These front and rear lights are truly excellent. A notable upgrade from the lights I was using before, both front and back.

The first part that I mounted was the dynamo. This required removing the bolt holding the left half of the V-brake on the front of my bike and reinserting the bolt with the bracket in place. It's an easy job, taking all of five minutes, but this of course has to be done with some care. If you are not confident about adjusting components around your brakes safely, please do not touch them but ask someone else to do the job for you. Please read the guide to setting up a bottle dynamo from a previous blog post. 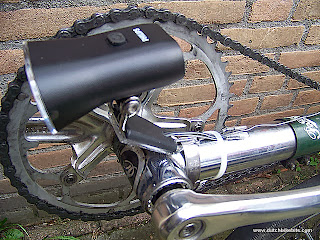 After installing the dynamo I installed the front light. For most upright touring bikes this requires nothing more than removing the bolt which holds the front mudguard in place and using it to attach both the mudguard and the included bracket for the light. However on my short wheelbase recumbent bike there's no convenient place to attach a front light. I attached mine by removing the bracket from the light and re-fitting it backwards. It was then possible to use a single hose-clamp to attach the bracket to the front boom, as shown in this photo. I also twister some wire through the bracket so that it can't possibly fall from the bike even if the clamp became loose, but the hose-clamp actually keeps it firmly in position anyway. 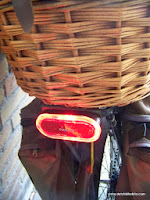 The long wire from the front light reaches to the two connectors on the bottom of the dynamo. Cable ties should be used to keep the cable attached to the frame so that it cannot be damaged. If the light does not initially work, swap the two wires at the dynamo. It's possible for there to be a short circuit through the frame if they are connected the wrong way around. It's also important to have the switch on top of the light in the ON position.

The rear light is simply bolted onto the rear rack in the same way as the previous lock had been mounted. This light is bright even in daytime.

The Philips rear light is visible from a remarkably wide 320 degree angle so greatly increases the visibility of a cyclist from the side as well as from the rear. Also, because the light is spread over a large "race-track" shaped area, this gives a better impression of distance and is more pleasant to ride behind than are many single point LED rear lights.

Finally I clipped some of the 36 spoke reflectors onto the spokes of my bike. I used just six on the front wheel and six on the rear wheel, leaving enough to provide a similar treatment on two more bicycles. A flash photo shows how effective these are when illuminated by car headlights, but note also the circular reflector on the tyres. Most of the tyres that we sell include this reflector.

A large rectangular area of the road is lit extremely well by the Philips headlight but the shaped reflectors used cut the beam off at the top so that it does not waste light and does not dazzle oncoming cyclists. These parts combine to make a very effective lighting setup both in order both to see and to be be seen.

We don't sell the battery version of the Philips rear light
Note that we don't sell the battery version of the Philips light. When the product was new, a small percentage of our customers for these lights found that theirs became full of rainwater and failed. Because this performance fell short of our quality standards we stopped selling the Philips battery rear lights. In fact, many models of battery lights are not 100% waterproof and can fail if they become saturated with water. We believe that if these lights are allowed to dry out should they become wet then not being entirely waterproof won't be an issue for most users, but we can't offer a guarantee. Rather than selling the lights we've therefore decided to give them as a gift to customers who also purchase a dynamo. By taking advantage of this offer you can put together a very high quality lighting setup for a very good price.

Note that this issue does not affect the rear dynamo light from Philips or their excellent front lights, both of which are weather resistant and guaranteed.

Sadly, Philips withdrew from the bicycle light market. We still sell a wide range of other quality bicycle lights, both dynamo and battery powered. Please see our full selection of bicycle lights

In particular, we now have 70 lux versions of both the Busch und Muller IQ Cyo and the AXA Luxx, both of which are brighter than the Philips dynamo headlight which I describe above.