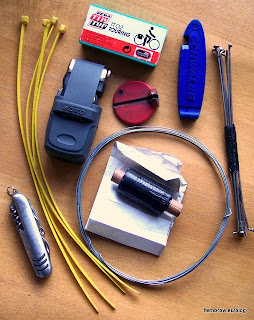 Unless accompanied by a car carrying equipment, cycle tourists need to be self sufficient to some extent. You can't predict when breakdowns will occur. Obviously what tools you carry with you depends on how far you're going and what you think you'll need. Weight is always an issue.

Unless I'm just riding into town and back, I always carry tools with me. A few days ago I decided it was once again time to check that the contents of my tool-kit still made sense. A few items had been used up, like patches, and a few tools needed to change for my new bike.

Everyone travelling any distance will surely carry a pump and spare inner tubes. However, other things are also useful to have. Even on shorter rides, the walk home or to the nearest bike shop can take quite some time, but when riding longer distances and if you may be a longer distance from "civilization" then it's even more important to be well prepared.

At the moment, my toolkit contains the following:
Things not shown in the photo include the inner tubes (I carry two, and do any puncture repairs needed at the end of the day if possible), a spare folding tyre in case of damage to a tyre, chain links to join a broken chain, and a spare brake cable. Of course, I also carry a pump.

Different people have different ideas, of course, and some like to travel lighter than others. We've put our suggestions for a touring toolkits in a special section of our webshop.

The kickstand failed on one of our rental bikes at the end of last year.

A bicycle which falls over unless leant on something is a nuisance, even just in storage, let alone in use. Leaning on brick walls causes damage to the bike. Other surfaces can be damaged by the bike. Therefore, I've replaced the broken part with our favourite type of single sided stand, the Spanninga Easy kick-stand. This is a long stand which is sturdy enough that it will support quite heavily laden bicycles safely. 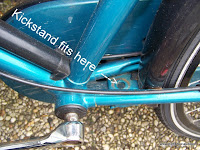 Luckily, with most bikes, fitting a kickstand is an exceptionally easy job to do. It fits to the bracket provided as part of the frame, with one bolt just in front of the rear wheel, and just a single tool is required to do this - an 8 mm Allen Key. 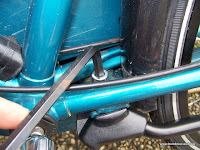 The stand simply has to be held in position with one hand, while the bolt is done up with the other. It takes just a couple of minutes to do.

It's a good idea to put a little grease on the thread of the bolt so that it won't seize up over time, and to put some on the mechanism of the kickstand as well to make it run a bit smoother.
Most bikes use the "30 mm" version of the stand. Dimensions of both variants are in the web shop.


And now something about tyre pressure and tyre choice...

The bike in the photos above is fitted with the same tyres as I've currently got on my Mango for winter commuting - the Schwalbe Marathon Plus. The great advantage of these tyres is that they are virtually impossible to puncture. As a result, they're our choice for most of our bikes, most of the time. If you prefer riding to repairing punctures, these are the tyres to go for.

They're also quite fast tyres... but only if pumped up quite hard. I realised on Sunday morning that after months of riding the narrow Marathon Plus tyres on the front wheels of my Mango were well under the maximum recommended pressure of 6.5 bar ( 100 psi ). In fact, they'd got down to about 5 bar ( 75 psi ) which is low enough that they roll much worse. I'd been disappointed by my speed of late, but of course pumping the tyres up to the recommended pressure restored their previous performance.

It's one thing to have to stop and fix a puncture in the middle of the summer when it's warm and the sun is shining, but something else altogether in the winter when it's dark and cold. That's why I use them especially in the winter.


But now it's just about Spring... and Summer is around the corner. This time of year, punctures are less likely, and in any case I don't quite so much if I get them. Soon, I'll take the Marathon Plus tyres back off my Mango and replace them with something which is a little more fun to ride with. For everyday summer use, I intend to switch to the the Marathon Racer. They still have a puncture resistant layer, so punctures should at the least be rare in summer conditions, but it's a much thinner one making them lighter and faster rolling than the Marathon Plus. They're well suited for everyday riding.

For racing, I've a pair of only slightly worn in Continental Grand Prix tyres for the front, or perhaps Stelvio or Durano. These are all nice fast rolling, narrow, durable, puncture resistant and light weight tyres with decent grip on the road, and should work well combined with a Marathon Racer on the rear.

However, I've also some more unusual tyres which I might use again, but only if the right opportunity presents itself: Three Avocet Fasgrip tyres. These are a real curate's egg of a tyre. They're fast, they're durable, but they have a magnetic attraction for sharp objects on the road so you get lots of punctures. The lightest sprinkling of rain results in no grip whatsoever, and even more punctures. I don't sell these. I don't think I could live with myself if I did. However, a colleague of mine at the Ligfietsgarage sold them to me personally (they don't sell them to the public either), describing them as "just like the Tioga Comp Pool". I should have taken this as a warning, but of course I'm a glutton for punishment so I instead took it as a recommendation. He was absolutely right. They really are just the same. I should have known what I was letting myself in for. But with both of these tyres there's a pay-off in the right conditions in that they do genuinely have low rolling resistance - so long, of course, as they're pumped up to their recommended pressures, plus a bit more if you're really daring... I raced with the Avocet tyres last year.

Tioga's Comp Pool is long out of production. I thought the Avocet was out of production too but it's still on the manufacturer's website. Occasionally someone comes out with a new tyre which is described as "just like the no longer available Tioga Comp Pool". Sensible people run away when this comparison is made... Speed without such compromises comes from the more sensible tyres which I mentioned earlier.

Posted by David Hembrow at 08:01 No comments: