Choosing between inner tubes and pumps 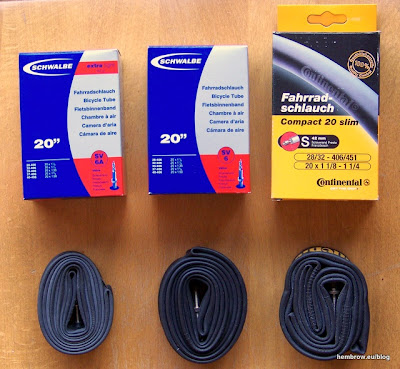 However, there is a difference in the construction, and some are better for some purposes than others. I've currently got three different inner tubes in stock which are suitable for relatively narrow 20" (ETRTO 406) tyres. This is how they differ: 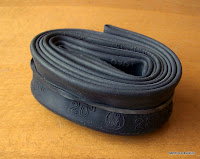 The lightest of the bunch is the Schwalbe SV6A. These have a claimed weight on the packet of 65 g, and that's exactly what my kitchen scales say they weigh.

This inner tube is the lightest of the three, and also feels most supple. I have not tested rolling resistance with this inner tube, but if there's a difference you can expect this will be the best performer.

It will probably also lose pressure faster than the other options, so you'll need to pump up your tyres more often with this inner tube. Also, maybe it's less damage resistant too.

Reflecting its special status, the SV6A costs an extra €2.38 over the price of normal Schwalbe inner tubes.

The second lightest is also a Schwalbe - the SV6. It says nothing on the box about the weight, I found it to be 95 g.

This is a standard grade inner tube from a quality manufacturer. It's still actually quite a nice supple inner tube, and it's what I have in the front tyres of my Mango at the moment.

Either this or the Continental are a good choice for everyday use.

The heaviest of the three is the Continental Compact 20 inner tube. Continental make extra thin high performance inner tubes (akin to the SV6A) in other sizes, but not for 20" wheels.

This is again a standard inner tube from a quality manufacturer, which again means it is actually of good quality. According to my scales, it weighs 100 g, which is an irrelevant difference over the weight of the Schwalbe equivalent.

The construction of this inner tube is a bit different. The rubber feels thicker than the Schwalbe SV6, though given that they're about the same weight it obviously can't really be so different.

What is a little different is that the Continental is wider than the Schwalbes, even though it's only rates as being suitable for tyres up to 32 mm wide, while the Schwalbes are for tyres up to 40 mm wide. This makes it a little more difficult to fit into a narrow tyre. Continental also specify that their inner tube will also fit 451 size wheels, while Schwalbe suggest theirs will not.

Either this or the Schwalbe SV6 are a good choice for everyday use.

In practice, I find the Continental is a slightly awkward fit even within Continental's own 28mm wide tyres. It's just a bit too wide, and makes it more difficult to fit the tyres. As a result, I'm using the Schwalbe SV6 in those tyres at the moment. If I were racing, I'd use the SV6A as it is slightly lighter, and more importantly it is reckoned that due to its flexibility it will roll a little better. I'm using a Continental inner tube in my rear tyre, which is a bit wider than they recommend, but here it seems a good fit. I also carry a Continental as one of my spares spare (I have two for personal use).

I also weighed a few no-name inner tubes for the same wheel size. Most weighed about 130 g, but one was 200 g - a surprising difference. There is almost certainly a difference in performance between such an inner tube and those from the better manufacturers.

Valve types
Another difference between tubes on offer is the type of valve in use. Some people have very strong feelings one way or another. It can be nearly a religious issue. However, I think each has its place

For racing, when you might actually care whether the pressure in your tyres is up to the maximum and want to measure them, there is an advantage with the Presta ("French") valve rather than the Schrader (car type) or Dunlop (also known as Dutch or English) valves. Also, as everyone else will be using these, if you borrow a pump it will already be set up to fit these valves.

However, unless there is a special reason to choose, all three types keep the air in equally well, so most of the time it's best to use what's convenient and what you're used to.

In the Netherlands, there are sometimes publicly accessible pumps designed to accommodate the Dunlop valve, and you can buy very well priced floor-standing pumps which make pumping these up very easy indeed. The perfect choice for everyday cycling.

I use Presta valves for sportier bikes and Dunlop valves for our town bikes.

As much as possible, I avoid the Schrader type as they're most difficult to push the pump on and off, and due to the larger area of pressure they're the type which most often gives problems with keeping the pump head on the valve while pumping.

However, I might feel differently if this was the most commonly used valve type where I lived as the convenience would then be on the side of the Schrader. In the US, these seem to be the most popular valves in use so they perhaps make sense for everyday cycling.

Fitting Presta valves in Schrader rims
For many people, including myself, the Presta valve is the best choice for higher performance bikes. However many wheel rims come ready drilled for the larger Dunlop and Schrader valves. It's common for people to use Presta valves in such rims and despite the difference in diameter it usually doesn't cause a problem, but inner tubes are sometimes damaged when abused in this way. For this reason, we now sell an adaptor to convert between valve sizes. This fills the larger hole in the rim and makes it safe to use Presta valves.

Pumps
Some of you might have noticed that for a long time now we've had a bike parts and accessories shop which didn't sell any bicycle pumps. I've now added two floor-standing pumps to the shop website, including one which is light enough to take along with you, if a little bulky. However we still don't have a truly portable small pump.

They seem an obvious thing to have, so why not ? The problem is finding a product which we can trust ourselves. We said from the beginning that we'd only list things that we either already use ourselves, or that we'd happily use ourselves. This is what we're sticking to.

One pump which we don't recommend and won't be selling is the SKS Airboy.
I bought my "Airboy" at the Mildenhall Rally, probably ten years ago. It cost me the grand sum of one pound. At the time I thought this was a bargain. However, it's too flawed to be useful. It has a double headed design with one side for Presta or Dunlop valves and the other side for Schrader. The pump relies on air pressure to keep a small rubber ball in a position to block the pump head that you're not using.

There are a number of problems with this idea. Usually, this means you can only pump upwards as initially gravity has to put the rubber ball in place. That may not sound like a big issue, but it becomes one as soon as you try pumping up tyres on a bike with laden panniers or a coat guard. However, the problems go beyond this issue. The heads don't fit well on valve stems for any of the three types of valve, and it's impossible to pump tyres up to an adequate pressure without the pump popping off the stem.

This problem hit me a few weeks ago when I got a puncture on a ride. Before leaving I'd picked up a pump to take with me, but not until I got the puncture did I discover it was this pump. At first I thought it would be OK, as in the past, I'd managed to get just enough air into a tyre with this to at least ride to a bike shop, but not this time. I had to walk a distance and ended up buying a working pump at a bike shop.

Anyway, I bought it ten years ago, so why am I writing about it now ? You can still buy these ! I've seen the exact same model for sale this year. To double the insult, in the last few days I accidentally bought another pump with exactly the same problems. We need something sensible and usable in the shop, so I added what seemed to be a well speced, but also well priced pump to an order from one of our suppliers. When it arrived, it turned out to be an SKS under a different name, with a variation on the same kind of head. It has exactly the same issues as the older one, plus a new problem: A spring works against you for almost half the stroke, making it difficult to achieve much pressure even if the pump would stay on the valve.

SKS used to be a very good name for pumps. I've a few old ones which work very well, and I'm sure they also still produce good models. However, I'm currently waiting for a different manufacturer's pump to turn up from a supplier. It's not fancy and expensive, because portable pumps tend to get damaged or lost. But if it works well it will appear on the shop website in a few days.